This article was published on the internet and then disappeared from the web.
It is reproduced here because we feel it is useful work that needs to be preserved.
We have been unable to locate the author.
If you can help us get a appropriate licence to use, please get in touch


Ear wax museum: a history of making your hearing better.

Speaking tubes all operate on a common principle - they pick up sound close to its source and direct it via a narrow pathway, usually a flexible tube, to the ear. In operation, the speaker talks directly into a funnel at one end of the tube and the listener holds the small tip at the other end in his ear. 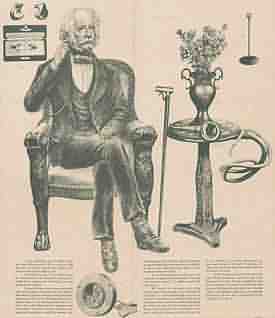 In the 17th Century, speaking tubes were adapted to a very special sort of hearing problem by Puritan couples who were courting. Custom of the time required the two to sit across a table from each other, and speaking tubes were used to ensure the privacy of their conversations.

Cup Anatomicals, used to slightly enlarge the sound-collecting area of the ear, may also have been worn by persons suffering from collapse of the entrance to the external auditory canal.

Earwells in a case evidently served the same function as Cup Anatomicals and closely resemble the ear specula used in examining the ear canal and tympanic membrane.

Acoustic thrones of various types were popular with many European royal families during the 18th and 19th centuries. Duguet is sometimes credited with inventing the acoustic chair in 1706. The throne shown here was made for King Goa VI of Portugal by the firm F.C. Rein & Son in 1819. Each armrest has openings carved in the shape of lion heads. Courtiers would kneel and speak into the mouthpieces formed by the openings in the arms. Resonators were concealed inside, and sound was conveyed from the arms to an earpiece which was fitted on the end of a tube. Today, King Goa's throne is in the Amplivox Museum in London.

Artificial eardrums were used by persons suffering from large perforations of the eardrum. The small silver wire was inserted in the middle ear and rested on the stapes.

First Image: Image One shows an acoustic cane, resting against a special table designed so that a tube from the metal flower urn can be passed through the top and out one side. The metal flower urn would pick up and resonate sounds, and the user would listen by holding the ear tip at the other end of the speaking tube. This device was not very popular since it required the user to remain seated and the speaker to talk near the mouth of the urn. A hearing trumpet typical of the many used during the 18th and 19th centuries. All of these items can now be seen in the Amplivox hearing aid museum in London.

The Dentaphone, used in the later part of the 19th Century, consisted of a round case with a thin diaphragm in the center. This was connected to a small piece of wood via a silk covered wire. When the wood piece was held between the teeth and the wire stretched taught, sound vibrations picked up by the diaphragm would pass to the user's teeth, and from there by bone conduction to the inner ear.

Ear trumpets were probably early man's first attempt at coping with hearing problems. In pre-historic times, hearing trumpets were simply hollowed-out horns of cows, rams or other animals. Later versions in wood and metal followed the same general contours as the natural horns.

In later centuries, man continued to refine trumpets, experimenting with the acoustical properties of such materials as silver, shell, horn, artificial tortoise shell, and most recently, plastic.

The hearing trumpets shown here all date from the Eighteenth and Nineteenth Centuries. In this period, it was common to fashion hearing trumpets from metal covered with vulcanite (hard rubber), or from brass, and them paint them black. In either case, it was hoped that the black finish would make the hearing trumpet less conspicuous against dark clothing worn by the user.

1-3 All three of these ear trumpets were used by Beethoven during various periods of his life. Numbers 1 and 2 are now in the Beethoven-Haus in Bonn. Number 3 was made for Beethoven by J.N. Mälzel (1772-1838), the inventor of the "Pan harmonicon", a mechanical instrument for which Beethoven wrote his Battle Symphony. Today, Mälzel is best known for his invention of the metronome. The ear trumpet he made for Beethoven may be seen at the Gesellschaft der Musikfreunde in Vienna.

4-6 These three ear trumpets are all of a type known as the London Dome, also sometimes called Grand Opera Dome. This type of ear trumpet was strongly resonant in the speech frequency. The exterior tube continues inside the dome, flaring out so that the mouth of the funnel faces the top of the dome. London Domes were made in many sizes, and the greater and individual's hearing loss, the larger sized instrument he was advised to use. Number 4 was made by the firm of Hawksley & Sons, London. The purpose of the lid on the bell end and the many large holes is not known, but the lid may have served to strengthen the thin metal and prevent bending and damage. Numbers 5 and 6 are a bell resonator style of London Dome that was made in polished brass and sterling silver. Both of these examples are ornately decorated with engravings and were manufactured by F.C. Rein & Son of England. They are now in the Amplivox hearing aid museum in London.

History of the Hearing Aid

The development of hearing aids can be divided into 6 time frames, dated respectably:

The earliest appearance of these is unknown, but they became very popular in the 1800's and a few are made in Europe to this day.

These are based on the telephone principle but Alexander Graham Bell had nothing to do directly with their development. These appeared first in limited quantities in a table model about 1899, but in wearable and practical instruments began to be available only in 1902.Carbon aids were popular through the 1940's. Most of these used a rather large 3-volt or 6-volt battery but did not have enough power to assist those with more than a moderate hearing loss.

Unlike the carbon instruments, these had adequate power for severe hearing losses but were also usable by persons with a lesser loss. The first one appeared in 1921, but this type did not become practical until the early 1930's, and did not appear in a wearable version until 1936. Vacuum tube aids required two batteries, so costs were rather high.

These can also be properly called electronic hearing aids. They appeared in a few models in late 1952 and virtually replaced vacuum tube hearing aids by the end of 1953. Transistors need only one battery and the reduced size permitted development of a number of types of hearing aids:

Hybrid hearing aids use a combined digital/analog circuitry. The first patent for hybrid technology was received in 1977 and the first commercial release of a digital chip to be integrated in an analog hearing aid occurred in 1986. These hearing aids have greatly increased our flexibility in fitting the hearing-impaired population.

Digital hearing aids utilize digital signal processing (DSP) chips which became available in 1982. Experimental body-worn digital hearing aids were developed soon after. Project Phoenix was established in 1984 and commercially produced the first wearable DSP hearing aid in 1988. Unfortunately, it was large (the combined size of a body aid and a behind-the-ear aid) and expensive and thus not a financial success. As recently as April 1996, the first fully digital behind-the-ear and in-the-ear instruments were made commercially available with a computing capacity of 40 million instructions per second. The current era of DSP hearing aids holds promise for maximum flexibility in fulfilling the unique needs of the hearing impaired population.