This article was published on the internet and then disappeared from the web.
It is reproduced here because we feel it is useful work that needs to be preserved.
We have been unable to locate the author.
If you can help us get a appropriate licence to use, please get in touch 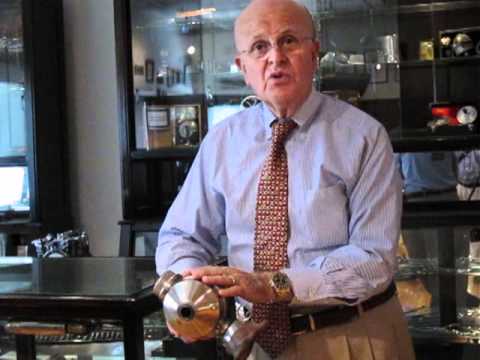 "My wife got fed up with all of this," explained Dr. Joseph Touma, laughing. "She said, 'Joe, you have to do something with it.' My daughter, Mona, said I should open a little museum."

That was in the mid-1990s. The ear, nose and throat specialist had been collecting medical artifacts for years, and they were piling up. At the same time, he was renovating a building at 314 Ninth St. in downtown Huntington and the 3,500-square-foot third floor was the perfect place to house the growing collection.

A practicing physician for 40 years, Touma's fascination with medical artifacts started with one simple ear trumpet he purchased nearly 30 years ago.

"I'm fascinated by the progress of medicine ... as far as deafness and hearing," he said, pulling out an assortment of the old-fashioned hearing aids from an antique display case. He has one of the largest collections of ear trumpets in the world, with hundreds of examples.

The earliest ones are made from seashells. He has one made from ivory ("This was a rich lady's ear trumpet"), a black one for funerals, one with a long tube that was used during meetings so the listener could move the trumpet to focus on different speakers.

Touma exhibits childlike joy when he shows one trumpet with eyeglasses attached.

"See, you can use it to hear, and then if you couldn't see, well, you use the glasses." Another one in the collection is made into a cane.

"If you're getting old and you need a cane, and you also have hearing loss ...," Touma said, demonstrating both aspects of the instrument.

"I graduated from one ear trumpet to all of these," he said, scanning the extensive array. "Then I went for the ENT stuff. As I was doing more ear, nose and throat work, I got into the history of medicine."

That led to the purchase of an entire 19th-century apothecary -- Lee's Pharmacy, in Pittsburgh -- and 1,000 books, some from the 15th century, through the early 20th century, just a few of the thousands of items in the exhibit.

"I started buying little things," Touma said, "at an auction in New York. I literally ended up buying a whole truckload at a reasonable price."

It took about a year to catalog all of the pieces, and he hired Marshall University students to do the work.

"One advantage of this museum instead of, say, a large, freestanding museum, like the International College of Surgeons, in Chicago, is that we don't have all of the statues of physicians and things like that -- we're just down to earth and we focus on what the doctors and patients used," Touma said.

The Marshall School of Medicine uses the museum to give incoming medical students a view of the past that few can experience. At this time, the museum is open by appointment only.

A perfectionist, Touma moves shipping boxes off the top of a display for a visitor. The neatly dressed physician darts from one area to another, pausing long enough to share stories of different pieces of equipment.

"Here's the 'quackery equipment' case. When electricity came, they used to electrocute people over an achy joint and say it helped," he said with a smile.

There is a case full of microscopes, dozens of them, from the early 19th century through the 1930s. Touma knows details about each one and can discuss its features and faults.

One case holds feeders for the invalid, china bowls with spouts, used to serve broth and liquids before the invention of intravenous therapy. A collection of spoons with lids was used to give doses of medicines.

"Medicine used to smell terrible, so they put the medicine in here," Touma said, pointing to the bowl of the spoon, "and then they closed this cover so you didn't have to smell it."